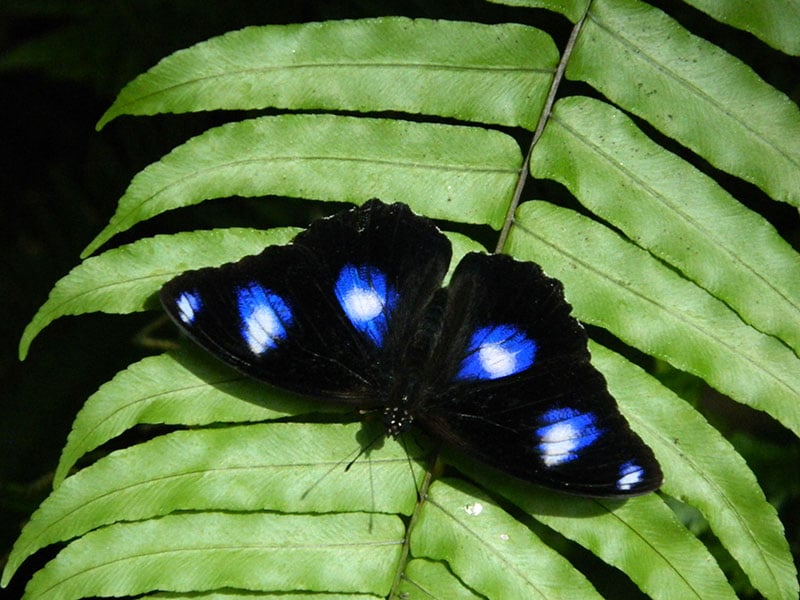 When it comes to the Common Eggfly Butterfly, the word “common” certainly doesn’t equate to boring!

Today we share 10 facts about this incredible butterfly species.

1. As a Pupa, Its Life Literally Hangs By a Thread

The pupa of the Common Eggfly suspends itself by just one point!

2. Its Name Is Pretty Literal

The “egg” refers to the white circle on the male butterflies wings.

Not literally, of course! However, the female Common Eggfly does not have the bright white “egg spots” and purple iridescence on her wings.

Instead, she is brownish-black, with faint white markings on the edge of her wings.

Next time you spot a Common Eggfly butterfly at the Australian Butterfly Sanctuary, why not serenade it with a little Billie Holliday?

This butterfly is commonly known as the Blue Moon Butterfly in New Zealand.

What can we say, it’s an esky vs chilli bin kind of situation…

Females are known to guard the leaves that they lay their eggs on. They even inspect the leaves for ants prior to laying!

6. On The Other Hand, Males Are Warriors

The male Common Eggfly is one territorial little critter! They are known to physically battle over territories and each butterfly has his own specific territory.

It isn’t exactly our choice of drink, but these butterflies love it! They consume sweat for its salt contents, which is lacking in nectar flowers.

8. They Pretend To Be Toxic

The white markings on the females outer-wing mimic the Common Crow Butterfly, which is, in fact, poisonous. Pretty clever way to deter predators!

However, these clever caterpillars developed an immunity to the infection and the population rocketed up to 40% by 2007.

Well, not literally; but they do have spikes and horns!

See the stunning Common Eggfly at the Australian Butterfly Sanctuary, the largest butterfly house in the Southern Hemisphere.